Where You Do Not Wish to Go

It occurred to me that I threw out this statement at the beginning of my last post, and never truly unpacked it.

"I don't know that I'm the same person who wrote in June."

And I still have an aging father with health concerns.

But now I am his caregiver, in many very tangible ways. For better or for worse, the reversal of roles that is often threatened, resisted, bemoaned between adults and their elderly parents--- it has happened. It is, more or less, complete.

I have made decisions for my dad (with my brother's help, of course) that he was not able to make for himself in the last year.

The week he was in the hospital was probably the most frightening week of my life. I awakened every morning an hour or more before the alarm, my heart racing. "I'm not ready for this" ran through my head on a continuous loop. "If only" was a close second in frequency, though my wise Beloved helped me to stop that in short order.

At the point at which I was told he would need rehab, I knew with complete clarity what had to be done. He needed to be near me. I couldn't imagine him in a rehabilitation facility with no family nearby to stop in daily, to encourage him, to let him know he wasn't alone. My brother agreed, and it was done. One day, in a very lucid moment, even my dad agreed, though the narrative has shifted since for him. He is convinced that he was kidnapped.

I imagine that's exactly how it felt. One day in a life he knew intimately, in a house he'd inhabited for about thirty years, with a view that was etched on his heart, and all his memories encircling him like a blanket. The next, in a completely new place, with, sure, some photos on the wall of children, grandchildren, himself and my mother. But even more than that: with the dramatic loss of ability.  He went from being able to walk (with great difficulty) unassisted, to needing a walker and/ or a wheelchair, and assistance from nurses and aides. He needs to wear a webbed transfer belt whenever he needs to stand and move himself (with help) from one place to another.

"Very truly, I tell you, when you were younger, you used to fasten your own belt and to go wherever you wished. But when you grow old, you will stretch out your hands, and someone else will fasten a belt around you and take you where you do not wish to go.”

So my dad has had to go where he does not wish to go, and so, in total honesty, have I. I now have a host of responsibilities, financial, legal, medical, and moral that perch somewhat uncomfortably on my shoulders. But this is my life now, and this is my role.

I try to see my dad at least every other day. I was going daily, but a good friend (who happens to be the chaplain at the facility where dad is living) told me that it might actually help the transition for me to give dad a day in between. So I do.

The learning curve for me in terms of what my dad's dementia means is steep. I was recently truly shocked to find that a move from one end of a hallway to another end of an adjacent hallway was utterly confusing and anxiety provoking for him. I was also not shocked, but surprised, to learn that he conveys more happiness and contentment with his situation to the staff and other residents than he does to me. The family, it appears, hears the unhappiness. I'm the safe person, and I'm also the person who might be able to help.

I think the biggest change for me, though, has been one of attitude. Before his hospitalization I spent a lot of time feeling very frustrated with my dad, even angry, at his unwillingness to make changes. Once he had his fall, once the clarity came, it's as if I had an attitude transplant. Now, the whole point is, is he ok? Is he being well-cared-for? Is he happy? Or, is his unhappiness something I can help with? Or, perhaps this: Can I at least hear his unhappiness, let him know he has been heard?

In a strange way all this trauma has brought my dad and me closer to one another. I know he no longer considers me a meddling kid who's trying to cramp his style, though I suspect he has discomfort with the role reversal (as have I). But we are both trying, struggling, muddling through, even though life has taken us where neither of us wanted to go.
Posted by Cecilia at 7:32 AM 6 comments:

I don't know that I'm the same person who wrote in June.

But that is probably a good thing.

In the middle of July my dad had "the fall." The one I had been hoping we could avoid, if only... Well, as Beloved told me when I called from the hospital in New Jersey, the time for "if only" is past, and the time for "what's next?" has arrived.

What came next for my dad:

A week in the hospital.

Several weeks of rehab in a wonderful facility in my town--midway, as it happened, between my work and my home. He loved it. He loved the people. He  loved the food. He loved Physical Therapy.

Then, the flood. A fairly terrifying (though very well-executed) evacuation from Wonderful Facility to another place--place that, like all subsequent places, would be compared (unfavorably) to Wonderful Facility.

A week later, a move to another wonderful Assisted Living facility.

Three weeks later (we're in late September now), two hospitalizations, one after another, for undiagnosed episodes of unconsciousness that resulted in our being told that dad need a skilled nursing facility.

Finally, an move to said facility, the dementia unit, because that seems to be progressing rapidly.

Dad is doing ok. He is at that stage in which he knows something is wrong ("Will I ever get my brain back?"), and is distressed about it. He can no longer walk unassisted by either a walker or helpers. He is encouraged to be as independent as he can, but help is a buzz away. He is encouraged to take part in all manner of activities, which he does, they tell me, with a very open and fun-loving nature.

When I see him, what comes through is his sadness and distress.

Today I am several hundred miles away, at Petra's Parents Weekend, the first of her college career. As of a couple of weeks ago, I was feeling fairly burned out by an intense summer of transitions and my new role as caregiver for my dad. On top of all this, my church was affected by the flood, both to our physical structure (many thousands of dollars  in damage, plus damage or total loss to the homes of many members) and to our lives as a community. I had cut my study leave short in the summer (when my dad had his fall), and Beloved and I had cancelled our September vacation together, scheduled as it had been immediately after the flood.

I learned of a conference in a city roughly halfway between my town and Petra's college. I signed up for it. And so I took three days of study leave, followed by three days of vacation. I am on day five of my time away, sipping a skim latte in the coolest coffeehouse I've ever found. (Petra tells me I've logged enough hours here to officially be considered a student.) We will meet (for her breakfast and my lunch) in a little while.

Tomorrow I will drive home, to my Beloved and my church community, and, energized, I will begin preparations for Reign of Christ/ Thanksgiving Sunday. 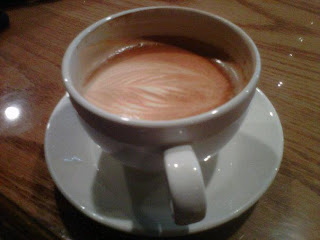 Next time: Life with Petra in the Land of the White Squirrel
Posted by Cecilia at 8:22 AM 4 comments: