Mark... Our Time is Running Out 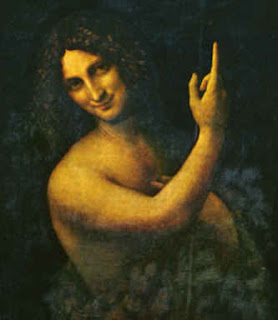 I will be preaching on the gospel lesson this coming Sunday, one of only a few Markan texts left to us in in Revised Common Lectionary Year B.

I am in premature mourning.

I love the so-called messianic secret. There is a Leonardo da Vinci painting of John the Baptist, an unusual one, in that he is neither portrayed already decapitated, nor looking like a wild man in animal skins. In this portrait he looks well, robust, and-- really odd for John-- cheerful. He is shown pointing his right finger over his left shoulder as if to say, Not me, him. And that's Jesus in the gospel of Mark. People keep wanting to pin him down, box him up, label him, and he keeps pointing his finger over his shoulder at God, and insisting, Not me, Him.

But we didn't believe him. We have made it All About Jesus. And... I'm not saying that's a bad thing. I think we needed a convincingly anthropomorphized God. And believe me, for me, Jesus is it. I believe that the divine rests fully in him, mysteriously. I can stand on Sunday and proclaim the Apostle's creed without reservation. But I think the Jesus of the Apostle's creed would make the Jesus of Mark shake his head, and point once more over his shoulder, and say, Not me. Not me.

i have no idea what you're talking about, but i love hearing it anyway. :) (said facetiously but intended with much love.)

I love Mark's Jesus, too! I love that he's the rebel Jesus, the ripped-jeans and T-shirt Jesus, who pushes back with parables, and turning questions on their head. And I agree: Jesus was on a mission to make us realize "it's all about God!" not "It's all about me!" I don't know where we lost our way on that one.
Bet it will be an awesome sermon!