Tears, some joyful, some not

I received the news as I was driving home from an enormous grocery store trip-- the kind of trip where you stock up on your canned goods, and your dried fruit, and your pasta and your rice and your eggs. It was a big trip, and long, because-- my goodness, a week before Christmas, and I suppose there are many parties between now and then. And so, my favorite grocery store was jammed with people, most of whom were in fairly pleasant-to-festive moods.

So I headed home with my trunk full of food, and the sun was shining to warm up the inside of my car on a cold day, and I heard my cell phone thunk with a text message. Assuming it was Petra, I took the next safe opportunity (a red light) to steal a quick look.

It was a text from the Human Rights Campaign. The procedural vote to permit the real vote on repealing Don't Ask, Don't Tell had passed. It was all but certain: that wretched, unjust law that makes the US less safe by denying gifted and educated and trained military personnel the opportunity to serve was going down. At last.

I immediately broke into tears. Real tears. I sobbed. It took me by surprise, actually, the force of my tears. Sometimes we don't understand the weight of what we blithely call "current events" until they take us by the shoulders and give us a good shake.

I called Beloved, and told her. "It's done. They're repealing it. Don't Ask Don't Tell is no more." And my love, who was in hear early twenties when Stonewall was in the news, joined me in my emotion. She didn't cry. She was jubilant. She just kept saying, "Isn't it amazing when the right thing happens?"

Here is a photo, from the NY Times, of someone who is weeping, but not from joy. This was taken after the Dream act was defeated, a piece of legislation that would have enabled those in this country without documentation, but who are clearly striving to be productive members of our society, a chance, a shot at that fabled great American dream. I suppose the Senate only had it in them to free one group from bondage today.

Some tears of joy. Some tears of frustration, anger... but I pray not despair. I believe Martin Luther King was right. The arc of history bends towards justice. It is but a matter of time. 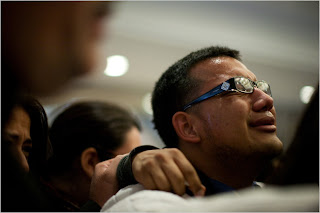 I believe it, too.

I had similar emotions. I didn't cry, but was deeply moved and happy to know that some of my friends who have been haunted by this are going to be free. Still, knowing that another group had to be the "other" today makes me sad. We have miles to go before we sleep on this march toward liberty and justice for all.

Hooray for the repeal of DADT.

Re "Dream" I know someone who was brought as a baby to another country (not the US) and the person had always assumed that they were a citizen of that country. Fortunately, my friend's story ended well, but not before an awful lot of heartache, stress, scares and a horrible 24 hour period where they thought they were going to be deported from the only home that they ever knew.

The human capacity to believe that all will be well as long as we have a scape-goat to punish is just amazing.

Beautiful. I might even consider entering a church again, after reading your blog! :)