Five years ago tonight I was sitting on my couch when the phone call came from my brother, to tell me that my mother had died. It had been a busy day-- I'd awakened in New York City, where my daughter and I had traveled with my son for one of his college auditions. I'd spoken to mom as we'd driven out of the city... I'd called her to tell her about the audition.

She was at home, on hospice care. She was so weak it was nearly impossible to understand her... her words were slurred together. But she knew it was me, and I told her I loved her. I knew the end was near.

In those days my brother and I were taking turns being at the house. We knew one of us would be there when she died, we just didn't know which one. As it turns out, he was there. Sort of. He'd taken an hour to go to a friend's house- literally, steps away. So, my dad was with my mom.

I knew it was coming. But you're never ready, really. My brother said the words... I forget exactly what... and I wailed. Just wailed. And Petra and Larry, who were both upstairs trying to get to sleep, came running, and joined me on the couch, one on each side. Sweet things.

It seems, this week, that about every other word out of my mouth has been a quote of something my mom said often, or would have said. She is very much with me. And the experience of losing D. this week-- who was so like my mom in personality and temperament-- has brought it all home that much more. 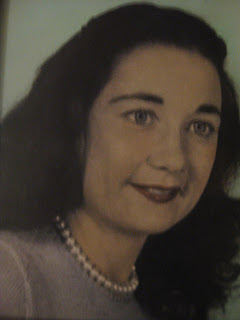 circa 1948
So. Praying today in gratitude for this extraordinary woman. She is with me still.
Posted by Cecilia at 5:06 AM