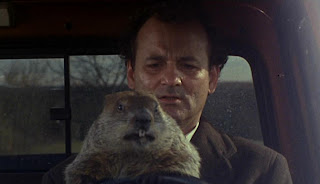 Petra and Beloved and I watched "Groundhog Day" tonight. You know the film. Bill Murray plays a not-so-nice weatherman from Pittsburgh who gets sent to cover Groundhog Day in Punxatawny, PA, with his producer (Andie MacDowell) and cameraman (Chris Elliott). At the end of a long and terrible day, during which just about everything that could possibly go wrong does, he wakes up to find out he is re-living the same day over. And then it happens again. And again.


The movie goes on to follow the many ways he tries to cope with and/ or game his situation. Everything from deciding he can do whatever he wants with no consequences, to trying to get the beautiful producer into bed, to trying to kill himself, and more. It is wonderful and painful and quite funny. And, in the end, he learns some things about himself.


Well, I sometimes feel that coming out is a little like Groundhog Day. It has been for me, anyway. I officially came out twenty-one months ago (you can read the story here, in the archive for that month. Start at the bottom of the page and scroll up). And... at that time, it was fully my intention that everybody in the world, personally and professionally, would know, from that point on, that I am a minister in a committed relationship with another woman. A lesbian. That was the plan.


Well, the way the wheels of bureaucracy worked in my denomination, it didn't end up being quite as public as all that. So, I found myself needing to come out to people over and over. First I told my congregation. Then my regional governing body. Then I told various colleagues, who asked me questions about  why certain things were going on in my congregation.


After a while, I got kind of tired of it. If I have to tell one more person, I thought, I will tear my hair out. And then I can be a bald lesbian minister. So I just floated along.


As a result, I don't really know who knows at this point. Occasionally I tell someone. For example. I met with a couple not long ago who would like to join the congregation. At the end of our meeting, I said, "Well, there's just one more thing. In the name of full disclosure." And, pulse racing, I told them. Whereupon they shrugged, and said, "Oh we know that." And I laughed a little too hysterically.


Next Saturday my regional body is voting on changes to the constitution of our church. One of that changes, something we vote on every two years (like clockwork), is removal of the anti-LGBTQ language from our Book of Order. We will be seeking to replace this:


“Those who are called to office in the church are to lead a life in obedience to Scripture and in conformity to the historic confessional standards of the church. Among these standards is the requirement to live either in fidelity within the covenant of marriage between a man and a woman (W-4.9001), or chastity in singleness. Persons refusing to repent of any self-acknowledged practice which the confessions call sin shall not be ordained and/or installed as deacons, elders or ministers of the Word and Sacrament.”

Standards for ordained service reflect the church’s desire to submit joyfully to the Lordship of Jesus Christ in all aspects of life (G-1.0000). The governing body responsible for ordination and/or installation (G.14.0240; G-14.0450) shall examine each candidate’s calling, gifts, preparation, and suitability for the responsibilities of office. The examination shall include, but not be limited to, a determination of the candidate’s ability and commitment to fulfill all requirements as expressed in the constitutional questions for ordination and installation (W-4.4003). Governing bodies shall be guided by Scripture and the confessions in applying standards to individual candidates.”
Never mind the alphabet soup (if it has a W it's from the Directory of Worship; if it has a G it's from the Form of Government). The point is, the amendment upon which we will vote-- and upon which the entire church has been voting-- is far superior theologically, a return to the historic practice of the church, and just plain good sense.
So naturally it is being fought tooth and nail. So much so, that a large group of (all-male) so-called "tall steeple" pastors have issued a letter complaining that the church is deathly ill. It appears to be an attempt to distract from what is happening: we are voting on something to end discrimination against a whole class of people and to restore the church's good name.
(Here's a very entertaining blogpost about the letter from my buddy John Shuck. Tell us how you really feel, John!)
So here's my issue. I'm thinking, I probably have to come out, again, next week. I probably need to stand in front of my presbytery and say, "Hi. I'm gay. My church knows all about it, and they have decided to keep me. So far, we are doing just fine. Let's just get on with the business of doing ministry. OK?"
OK campers, rise and shine, and don't forget your booties, 'cause it's cooooooold out there today!
Posted by Cecilia at 7:23 PM

Blessings to you my friend. I know you will find the words and believe your witness will be powerful and filled with the Spirit.

Coming out is a never ending process. There will always be the new mailman, neighbor, doctor, etc. Even worse for my children for every new friend they make and want to bring home, and those friend's parents and on and on.

It is my hope that someday it will not matter, will not need an explanation, will not give us a moment's hesitation.

I do beleive that as people get to know us as people, the differences will melt away and everyone will get on with their business.

Good luck in your little corner of the world.

Thanks for the link! You are doing well at this whole coming out again and again thing. There doesn't appear to be a close that can contain you!

er I meant "closet that can contain you!"

You get used to it. I've actually had lots of fun coming out to various people. My favorite are coming out to telemarketers. They ask for my husband and I'll say I don't have a husband...I have a wife. Then they ask to speak to her.

youre a sick pervert , your letting people believe its ok just to satisfy your perverse desires. theres a special place in hell for you.

I pray for your peace.