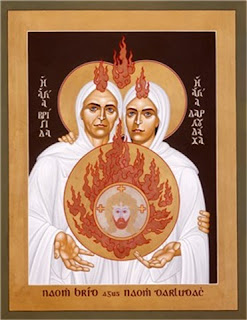 I love the blogging world. Where else might I have found this treasure?

Raised by Druids, Brigid seems to have made a smooth transition from being a pagan priestess to a Christian abbess. Today she is Ireland’s most famous female saint. Legend says that when she made her final vows as a nun, the bishop in charge was so overcome by the Holy Spirit that he administered the rite for ordaining a (male) bishop instead.

A younger nun named Darlughdach served as Brigid’s ambassador and her “anam cara” or soul friend. The two women were so close that they slept in the same bed. Like many Celtic saints, Brigid believed that each person needs a soul friend to discover together that God speaks most powerfully in the seemingly mundane details of shared daily life. The love between these two women speaks to today’s lesbians and their allies. Some say that Brigid and Darlughdach are lesbian saints...


Read the whole thing here. And many thanks to Madpriest for the tip!

Thanks for quoting and linking to the Jesus in Love Blog on LGBT spirituality and the arts.

I enjoyed visiting your blog too.

You might enjoy other posts in our GLBT Saints Series such as Perpetua and Felicity.